Thanks to our Imagine Cup team’s enthusiasm we became the first UK team to register for the competition this year. As a reward for this @MsUkStudents invited us to attend the Uk Tech Days special on the 5th of October, during which Steve Ballmer was Keynote Speaker. We all snapped up the opportunity, things like this don’t come around often. I’d like to thank @bennuk and @MsUkStudents for this thoroughly enjoyable and awesome opportunity.

A fairly early start, in comparison to what I’ve been used to lately, of 7am to get to ExCel (the ICC) in time for the event. We arrived ‘fashionably early’; using time to explore the caverns that are the ICC. 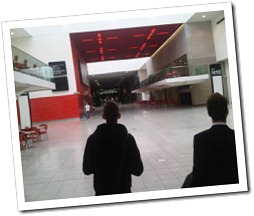 Next up was an awesome demo of Windows Phone 7 by @bennuk which left us wanting one – for me, once again. They’re an awesome bit of kit, a totally different user experience from other platforms with heavy integration with other platforms. Really smooth interaction and ultra responsive, but more on that in another post.

After our previous failed attempts at entering the event, because it wasn’t open, we were then able to pick up our name badges for the day, which I’m glad to say we were allowed to keep. Picking up our lunch gave us time for some networking with each other (@Daniel_Parker @jhomerston @majorshots @adambonneruk @liamwba @olivier_vg), real world developers and other past Student Partners.

The event was opened by Steve Ballmer. He said he didn’t want to come between us and Windows Phone 7, which shows how highly he rates it. Ballmer’s talk was majorly focused on new opportunities and utilising the existing and future technologies that Microsoft Have to offer. To him, the cloud did not stop the need for powerful devices, in fact, almost the opposite. Clients want to use smarter, faster, better devices utilising the cloud’s features.

This idea is what has driven IE9 to be what we see it today. A browser, displaying as much of the site, while hiding the fact that it’s a browser. Making use of the computer’s capabilities – hardware acceleration.
Frequent mentions of Sharepoint and Windows Phone 7, at a talk about the cloud, leads me to believe something big is going to happen with Sharepoint in the cloud. It also confirms how strongly Microsoft is pushing WP7. Get ready for the release – you won’t be able to miss the marketing.

Following Ballmer’s talk he took a Q&A session. Questions asked varied in area and response. A lot of these prompted him to note things down, which shows he is keen to make changes that developers want, after all we are his “favourite people”.

Running digs and jokes at other companies were also quite heavily engrained in Ballmer’s talk. With iPad users being told to “bend over” and Android developers told to develop for Windows Phone 7 where your app “will work on all Windows Phone 7 phones”.

Next up were various ‘Deep Dives’ into Microsoft products and services.

After all of these talks, the day for us didn’t end immediately. We had a meal in Nandos with some jokes and chatter. A couple of other students who had attended the event (@timROGERS & @Duffleman) joined us and @bennuk. Apparently students provided 45% of overall tweets for the day. Shows the drive and enthusiasm we have!

A great day out with a lot of people to talk to and meet. A chance to see Steve Ballmer – something I recommend you never turn down. Full of, almost scary, relevance to @Inspiratech’s project idea for Imagine Cup.