Well firstly, I'm not a fanboy of anything (at the moment). If I see something I like I'll like it. But I won't fight a company's corner for them if it gets to that. If they do something I feel should be done better I'll say so.

Now for the scenario; Doing a bit of work and a track you don't like comes on. So you change it, right? Well for me that was the last time with that Hard Drive. After clicking the next track I was greeted with a cringe inducing crunch and click from my Hard Drive. Frustrated I tried moving the mouse. Still moved, as soon as it clicked nothing happened. Lovely experience. Knowing now I had 0 chance of getting a more recent backup (yep, I already had a copy). I was frustrated. Being at uni and not in a position to go running to an apple store with it.

I found an article online by Apple stating that this was a relatively common issue with the generation of MacBooks that mine belongs to. Confirming that the Hard Drive was dead.

I took it back home and there it sat. PC World weren't forgoing with a fix. Apparently it was foolish of me to assume that as they sold apple products they would also provide service from them.

After finishing my first year at Uni I phoned Apple to see what could happen. I knew the repair would be free, just how I could go about getting it. They were very helpful and arranged for it to be picked up and taken away for repair.

Within a week I heard back from the company Apple use to fix it asking about a cosmetic issue. Not covered by Apple. Now I realise for some it may be an issue, but for me it wasn't and isn't. If it had been free I'd have snapped it up, naturally. However for an issue so small. £120+ meant there was no chance I would do it. For a bit of plastic no less. 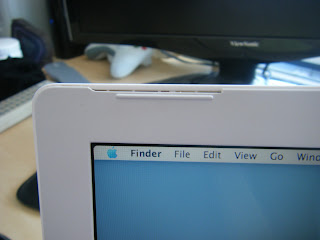 I have now begun to restore it to the point at which I left it. I wanted to do a clean install of OS 10.6. I have a 900mb download waiting until the download limit seems safe. Would like the newest Xcode too. But that's not a nice size either. May do that at uni.

A nice speedy repair, which really shouldn't have been needed. Along with a bonus of a 160GB hard drive which seems to have mistakenly been installed to replace my previous 120, but I'm far from complaining.