When my Trust mouse decided that it was going to randomly stop clicking midway through a click'n'drag or highlighting text I decided that it was time for a new mouse. So off to PC World I trotted in the hunt for a cheap mouse that would last me a while. The choice was pretty limited with the price range I was looking for.
I decided on the Microsoft Notebook Optical Mouse 3000. Being reduced from around £18 to £13 it was a fast decision. I have limited desk space so a smaller mouse was more suitable. 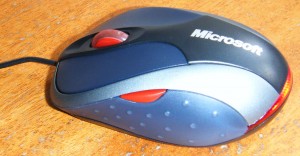 I was a little frustrated that I needed to install the drivers from CD, I prefer hardware to automatically download the drivers for me - lazy as I am. Then more frustratingly I found that there was a problem with the provided drivers - no Windows 7 support. So Action Centre pointed me to the download site for the mouse. Within seconds it was installed and I was using it.
The first thing I noticed was how the scroll wheel was completely smooth. All other mouses (was told that's the correct plural for computer mouses) that I have used in the past have had a click to it.
Now what truly sets it apart from the others that I have tried:
For the few occurrences that I find the need to scroll horizontally the scroll wheel can also be used sideways. With a push to the left or right it begins to scroll, neat little feature and it doesn't feel strange or awkward to do either.
Now 'The extra button'. This, like the scroll wheel click, can be made to perform a specified action from a large list of options. 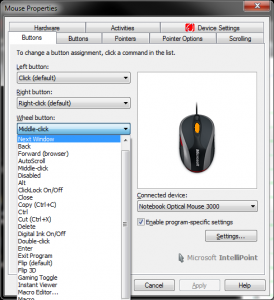 The default of which is Magnification, which personally I don't have a need for. Just where your thumb is makes it easy to use and I'm sure in no time I'll get used to just using the extra button instead of minimizing (which I have it set to).